I went to see the Panama City POPS Orchestra 9 years ago. I was reminded of my years of taking violin lessons from my grandfather, Eugene Goldflies, when I was four years old. As a child through high school I played in the school orchestra. But after I graduated I only played electric bass. Flash forward to the early 2000’s… I picked up a Zeta Crossover EUB (Electric Upright Bass) in Pasadena CA. The fretless sound and the comfortable scaling of the neck made for great playing experiences and an easy transition from the fretted bass.
END_OF_DOCUMENT_TOKEN_TO_BE_REPLACED 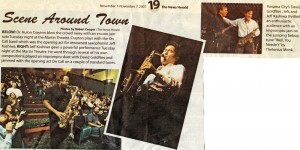 In Memory of Dr. Hulon Crayton.

Update: Hulon passed away early in 2015. He was a good friend, a successful musician and the joy he brought to so many will be remembered and missed. I had the good fortune to work with him on his smooth jazz projects.

Dr. Hulon Crayton (the artist known as Hulon) had formed the On Call band with Dr. Keith Banton, many years ago. I was asked to play with them. Hulon and Keith split into two bands and Hulon kept on going with On Call with another bassist. I in turn focused on my double bass chops and began playing with the Panama City POPS Orchestra.
END_OF_DOCUMENT_TOKEN_TO_BE_REPLACED

Rockin’ Blues with the Healers. The band is still an area icon for the blues and is lead by Kelly Hundley. At the time Boogie Tracks Studio owner JJ Crews was playing drums with the group. JJ was a smart, solid and innovative drummer.

We recorded a CD with the band – one of the few times that the band recorded. Kelly is a phenomenal performer and showman. His playing is very natural, flowing and intense. I had an original tune on the CD – Gutbucket. I’ll get it on the site asap!

Oddly enough I do not have a lot of photos from this era. Here are a few photos.

The Filter Kings: a high energy southern blues band reminiscent of the Allman Brothers complete with dual guitars, a screaming Hammond organ, and a great rhythm section centered around talented dual percussionists and a cascading bass. So who were The Filter Kings?

The group “The Filter Kings” was formed after the breakup of another group called “The Nerve” lead by the creative and talented John Allmet. After the break up the Hank, Woody and Chet were somewhat unsure what to do and I suggested we keep on jammin’. So, we did and the Filter Kings were born.

We played a lot of beach gigs here and there. We were joined from time to time by Gary Allman. Gary Allman bears an uncanny resemblance to his cousin Greg Allman. Not only physically but also in performance. Playing a Leslie Hammond Organ, Gary captured the essence of southern blues.

We also were fortunate to have former Gatemouth Brown guitarist Luther Womble (Blue Lou) sit in from time to time. Luther was (and still is) is one of the south’s great blues guitar players.

Hank Barbee, then age 22, was the other guitar player for The Filter Kings. A native of Raleigh, North Carolina, Hank picked up the guitar at 11. He had spent the past two years playing lead guitar in The Nerve and recording and promoting the Band’s original self-titled CD. Self-taught, he describes his early influences as old blues, bluegrass, rock-n-roll, and jazz–all of which still show in his playing today. The surging rhythm and soaring melody of his playing are a perfect blend for the surging nature of the band.

Drummer John “Woody” Woodward, then 26, comes by his musical talent naturally as both his parents played. He began his musical career with piano lessons before switching to drums at age 11. Woody played with the band On Four for 6 years, and in April 1990, they opened for Meatloaf. Also a member of The Nerve for two years, Woody’s energetic drums bring an intensity to the band that the other members describe as “focused” and “pedal to the metal.”

Chet Miller, then age 26, born in Opelika, Alabama, is the band’s percussionist complimenting the band’s rhythmically focused sound with what he defines as “organic improvisation.” Behind those congas, bongos, and assorted hand percussion lurks a mind that is quick, surprisingly well-read, and sublimely in tune with the groove around him. Chet abandoned a successful career in banking to join The Nerve and live rock and roll, and his playing reflects his pursuit of transcendence.

Here are a few tracks from the Panama City Jazz Fest held at the Martin Theater. We were joined on this gig by the phenomenal saxophonist Craig Duran.

The David Goldflies Group with Miles Osland was a group based in Lexington KY. Miles was the Director of Jazz Studies at the University of Kentucky and enjoyed doing community outreach projects with area musicians. I was fortunate to be chosen by Miles to be one of these outreach projects. We created a CD called “One Tan Arm” with the following line up:

The group started out as a Tuesday night jam band at the Z-Pub, a local watering hole in Lexington, Kentucky. All of the tunes were written on the bass and later arranged for the full band.

The CD includes 3 live tracks as well as the 8 studio produced tunes. The tune “Obsession” was written during my five year tenure with the Allman Brothers Band as an extension of the groove on the Grammy nominated instrumental “Pegasus” by Richard “Dickey” Betts. The tunes “Obsession” and “Blues Jam” were recorded live at the Z-Pub. “Lucy Paducah” was recorded at our One Tan Arm record release party at Lynaugh’s Pub, also in Lexington, Ky. It was a jammed packed night!

The exceptional musicianship of Miles Osland, Hal Cruise and Mike Lacy made making this music almost effortless. All of the sessions were live and very little overdubbing used to produce the final recordings. Long time friend and sound man Doug Patton mixed our live shows and generally spread around the excitement we all felt playing this material.

Here are a few of the tracks from the CD.

Soon after the post-Allman Brothers breakup (’83?) splinter bands all fizzled out, I entered a very creative period in my life. I was left with all my skills, a little money and time on my hands in Bloomington, Indiana. Not playing in a group was a new experience for me since I hadn’t tapped into my talents as a single performer (guitar, vocals, violin) yet. I basically hung around the campus of Indiana University and jammed with different musicians.

At one jam in a particularly dirty basement, a fellow by the name of Larry Clyman walked in and began playing guitar. It was instant communication between my bass and Larry’s exceptional touch on the guitar. We wrote our first song, “Esus,” in two days, played our first gig in four days, cut our first recording in three weeks and started doing opening act gigs for artists with the (then new) Windham Hill label within six weeks. It must have been the right stuff at the right time. A huge amount of composition went on during that time. We spontaneously took advantage of all of our writing opportunities. For instance, while we were having one of Larry’s guitars repaired by a luthier in Nashville, Indiana we used two of the luthier’s guitars and wrote (created on the spot) the song “Workshop.”

The Duo: Larry Clyman and David Goldflies by Goldflies Music

Songs poured out of us for about 9 months. We both eventually moved on, but this was one of the most creative periods that I’ve ever experienced (so far!).

In 1977, kickin’ around Cincinnati at the ripe old age of 20, livin’ ’round the corner from the Over The Rhine District, one of the toughest, poorest and roughest areas of Cincinnati (which later became a swanky bunch of night clubs, then the riots came and I think it just went back to being tough) I spent hot summers and very cold winters there playing in various local bands.

The night before I met Richard “Dickey” Betts, one of the two original guitarists in the Allman Brothers Band, I’d stayed up late studying (and am still studying!) the masterful jazz composition “Giant Steps” by John Coltrane.
CONTINUE READING

I was performing in a Top-40 group in Northern Kentucky (you would have loved hearing me sing “Play That Funky Music”… agh!). One night, about 1.5 weeks into the gig, in walked Dan Toler, the second guitarist in Mr. Betts’ group, Great Southern Band. Dan was from Connersville, Indiana and had been performing and recording with Dickey for several years. The band had lost its bassist in Chicago and the search for a replacement was on. Since Dan hailed from the Cincinnati (Southern Indiana) area, they felt they could use his contacts to locate a new bassist…immediately!

Dan knew of me through his very talented brother, David (Frankie) Toler (who later played in The Allman Brothers), and wondered if I would like to audition for the group. (Sadly, David Toler passed away June 6th, 2011. He was a joy to work with and to know. His beautiful spirit and talent will be missed.)

At first I didn’t connect the name Dickey Betts with the ABB, but I soon made the connection and jumped at the chance to meet this legendary performer.

I joined the Great Southern Band, and after forming a close musical rapport with Dickey, I was asked to be involved with the reformation of the Allman Brothers Band in 1979.

Looking back, there is no question that the prior year and a half with Great Southern was the perfect classroom for playing in the Allman Brothers Band. Dickey is a very expressive performer, and his control of the group through body language (conducting) took a while to get used to. Once you learn where he is going it’s a pleasure to ride along. 🙂

Greg Allman, Butch Trucks and Jai Johnny Johnson (Jaimo) joined the Great Southern Band in concert in Central Park, and the stage was set for another Allman Brothers Band album. The first album, Enlightened Rogues, contained the minor hit, “Crazy Love”. Also included was the Grammy nominated rock instrumental “Pegasus.” I was also fortunate to have co-written a song with Dickey “Try It One More Time” on the Enlightened Rogues album. It’s a “funky” lick using diatonic 6ths inspired by the song “Right on the Money” written by Bill Bartlett, the founder of the pop groups The Lemonpipers (Green Tamborine) and Ram Jam “Black Betty”.

Albums with the Allman Brothers Band:

Many years of international tours and hundreds of dates later, Dickey and Greg decided to part ways again. After a short period with the Greg Allman Group, I was asked to join forces with Dickey Betts in another interesting group called Betts, Hall, Leavel and Trucks. There was a great deal of talent in this group. The addition of Chuck Leavel (of Sea Level, Jessica, and now The Rolling Stones fame) and Jimmy Hall (dynamic lead vocal and sax player from Wet Willie) really made working with the group a pleasure. Unfortunately, the group never recorded. Those great jams only exist in a few people’s memories. I’ve recently heard rumors of a few bootleg mixing board tapes floating around and some youtube videos. Good luck locating them!